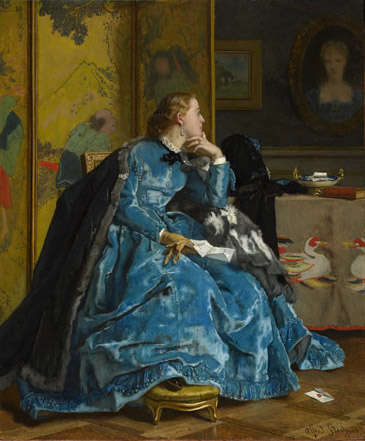 Not Asian Art but I did enjoy the Royal Academy’s exhibition of late 19th century French painting, mainly Impressionist, from the Sterling and Francine Clark Art Institute.  It includes several pictures reflecting Europe’s love affair with Japanese art and for this reason was recommended at the gallery talk on Japanese lacquer.  Renoir, in Girl With a Fan, shows his subject clasping a Japanese fan, suggesting a young woman of taste, at ease with current fashion.  The design of the fan, with its figures and calligraphy, is sketchy and imprecise, making it all the more tantalizing.  Further Japanese art objects appear in Stevens’ A Duchess (The Blue Dress) – a Japanese screen with mountain scenery, a tablecloth with birds – but with a serious nod to 17th century Dutch genre painting.  Meanwhile, Bonnard, in Women with a Dog, juxtaposes contrasting fabrics, checked, spotted or ruched, in an idiom straight from Japanese woodblock prints.