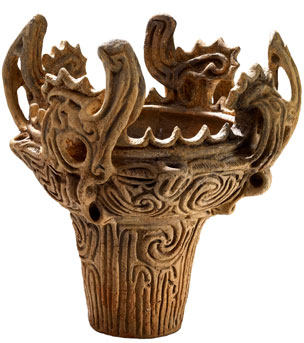 As part of its “Objects in Focus” series, the British Museum is showing three earthenware pots from the Jōmon period (ca. 10,000 to ca. 300 BC), the time of the earliest Japanese ceramics.  Centre-stage, a “flame pot” and “crown pot” from around 3000 BC, both loans from Japan (their names reflect their shapes).  The third is a British Museum piece from 5000 BC, with 19th century enhancements in gold leaf and lacquer.  Bizarrely, the labels omit to give the dates in their proper form, using the rubric “5000 years old”, as though their antiquity were the most interesting thing about them.  I was more intrigued by the striking variety of design elements and their symbolic possibilities.  On the flame pot, for instance, different elements are interpreted as flames (or salmon jumping), a cockerel’s tail, a cockerel’s comb, and dragonfly eyes; the sawtooth pattern is meant to ward off evil spirits.