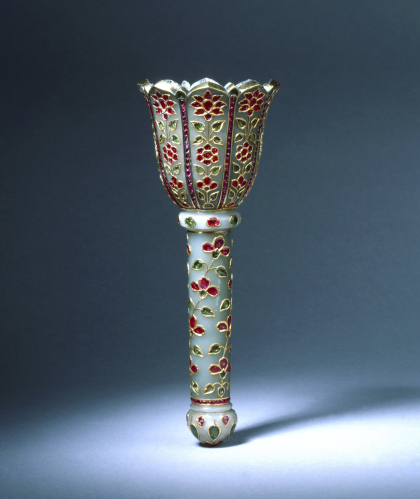 A deceptively large exhibition, although this should not have surprised me: it covers over 300 years of Mughal rule, from 1526 to 1858.  The 90 minutes I had at my disposal were barely enough to do it justice.  The exhibition design adds a definite sense of drama – cubic wooden frameworks casting interesting shadows, Indian music playing in the background.  It was slightly reminiscent of the British Museum’s show Shah 'Abbas: The Remaking of Iran (2009), which used Islamic design elements.  Commendable efforts are made to explain the historical framework to the uninitiated: a slick computerized presentation takes you through key battles and shifting boundaries; the initial “Mughal Emperors” section offers a chronological presentation of the emperors via their portraits, the labels rich in little nuggets of murder and intrigue.  Paintings predominate, and demand detailed viewing, but this viewing is gloriously enriched by the inclusion of objects, some owned by the historical figures in question – a set of armour for horse and rider, a crown, a sword, a flywhisk encrusted with jewels.  Alongside are a range of historical documents, public and private, Persian and English, which, thanks to decent labeling, make the historical narrative all the more vivid.  Highly recommended.