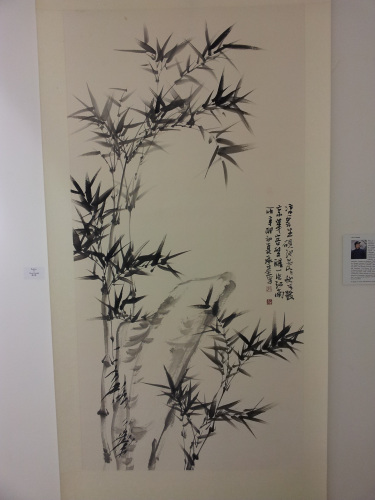 It was a shame for Londoners that this show ran for only three days.  It was modest in size, featuring traditional painting by half a dozen contemporary Chinese artists, but full of delights of all sorts.  At the entrance, particularly intriguing for the British viewer, lay a long handscroll by Zhang Ziqi (b.1943), celebrating topographical highlights of England, including Whitby Abbey, Yorkshire and the Lake District.  My last post highlighted two seasonal flower paintings by Ren Guangrong (b.1945), radiant with orange and vermilion hues, and a landscape by Li Hui (b.1964), bewitching the viewer with its understated glimmer of turquoise-green water.  The image is complemented by the painter's own poem praising the landscape of Jiuzhai.  Meanwhile, Chen Chengji (b.1950), a bird and flower specialist, inscribes his haunting ink painting of bamboo with a poem by Chen Hengke (1876-1923), evoking a sense of autumnal melancholy.  My thanks to Sarah Huang for transcribing and explaining these two inscriptions (see below).

The inscription contains a poem composed by the painter Li Hui in praise of the fantastic landscape of Jiuzhai. The signature reads “Li Hui painted in the ‘Auspicious Month’ (unidentifiable) of Year Ren Chen (2012), in Jingguan City (Chengdu)”.

The inscription contains a poem that seems originally to have been composed by Chen Hengke (陈衡恪 1876-1923), written on an album leaf he painted. The content may be autumn melancholy of a sojourner in the capital. It mentions the rain in Jiangnan 江南 in the end, although it is unclear whether Jiangnan is the capital or the distant hometown - probably it refers to the hometown and "the capital 京华" refers to present day Beijing. The painter Chen Chengji borrowed the words and signed "Chengji painted in early summer of the Year Xin Mao (2011)".