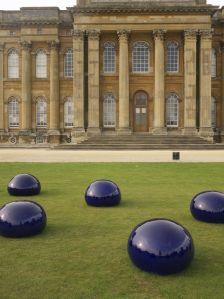 Numerous works by Ai Weiwei (b. 1957) are currently on view at Blenheim Palace, in a show that feels more like a treasure hunt than a regular exhibition. Cleverly, the objects are incorporated within the standard tour of the Palace interior, so that you view them against the rich backdrop of a stately home, and have the excitement of trying to spot what is authentic and what is ersatz.

In some cases, the match between the object and its surroundings is pitch-perfect – for instance, Chandelier (2002), the fabulous chandelier that dominates the high spaces of the Great Hall; or Small Plate with Flowers (2014), a set of porcelain plates that sits naturally in the China Ante Room. Even the glitzy Circle of Animals (2010), a representation of the Chinese zodiac, is admirably suited to the extravagant setting.

Other works create interesting dissonances, humorous or otherwise – such as Handcuffs (2012), a pair of wooden replica handcuffs resting on the bed in Churchill’s Birth Room. In fact, this item really puzzled some of the other visitors while we were there (there is no labeling, unless you buy an explanatory pamphlet before you start the tour).

Among the more unnerving exhibits was He Xie (2012) in the Red Drawing Room, a vast quantity of porcelain replica crabs. He xie means literally “river crab” but sounds like the word for “harmonious”, which is part of the Chinese Communist party slogan, so the phrase has come to stand for the restriction on freedom of expression in Chinese society. Here, the crabs are heaped on the antique carpet, before the ornate chairs and the marble fireplace, creating an effect that is bizarre and unsettling.

Ai Weiwei has not been able to leave China since 2011 so he collaborated with the Blenheim Art Foundation via architectural plans and models of the site. Some pieces are shown outside, such as Bubble (2008), a cluster of large hemispheres in dark-blue porcelain. In addition, photography from his New York years (1983-1993) is on view in a separate gallery, together with photos by Andy Warhol of his visit to China.

Information on He Xie was taken from the website of the Brooklyn Museum, at http://www.brooklynmuseum.org/exhibitions/ai_weiwei/he_xie.php. 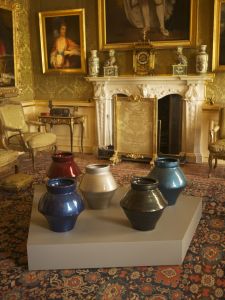 Below: He Xie, 2012. Porcelain. Image: Blenheim Palace, at http://www.blenheimpalace.com/whats-on/events/autumn/ai-weiwei-at-blenheim-palace.html#prettyPhoto

Below: Circle of Animals, 2010. Bronze with gold plating. Photo: Blenheim Palace at http://www.blenheimpalace.com/whats-on/events/autumn/ai-weiwei-at-blenheim-palace.html#prettyPhoto 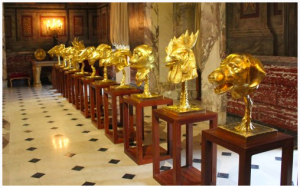 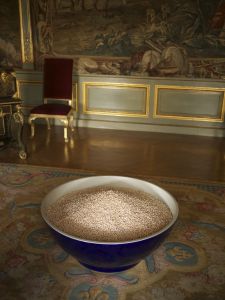