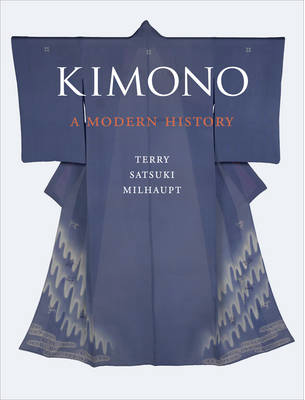 This elegant history of kimono focuses on the 19th and 20th centuries - of which the cover photo is emblematic. It shows a woman's summer kimono with a design of plovers in flight over stylised waves, the design radiating outward from the centre front of the kimono. Dating to the years 1900-1925, the design is based on a classic motif seen in the printed pattern books 100 years earlier, but recalibrated for the modern age.

This is exactly what drew me into this book - the quest to analyse different elements of that transition from old to new, in the Meiji era (1868-1915) and beyond.  Japan was opening up and so much was on the brink of change.

Milhaupt's narrative covers both technical aspects and social history: the growing use of foreign materials and technologies in kimono manufacture; the rise of the big Japanese department stores; and new advertising techniques, such as posters, pamphlets and women's magazines.

She also explores more conceptual trends such as the popularity of the kimono in Europe and North America and its connotations there; and a new nostalgia in contemporary Japan for the vintage kimono of olden times. These broader themes are complemented by a stand-alone chapter that presents the individual histories of a handful of specific kimono designers.

Technical terms from the Japanese are used throughout and, though explanations are given, I think a glossary at the back would have been beneficial. The illustrations are excellent and eye-opening - there were many items I had not seen elsewhere. A detailed and interesting read, recommended for those with a passion for costume and fashion.

This book was received as a gift from family.