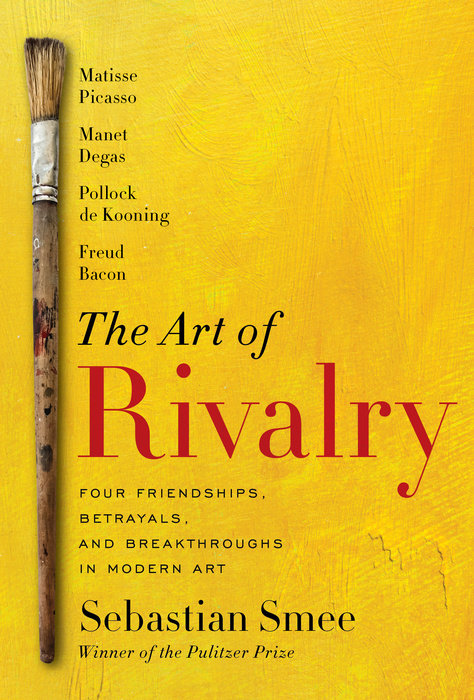 The Art of Rivalry by art critic Sebastian Smee is a biography with a difference. Looking at four pairs of artists from the modern era, it explores how they influenced one other. There is a single essay devoted to each pair, presented in alphabetical rather than chronological order: Freud and Bacon; Manet and Degas; Matisse and Picasso; and Pollock and de Kooning.

I liked this concept because it seemed to offer a new take on these giants of the art world. The decision to limit your focus to the impact of one particular friendship (or rivalry) allows you to go deep without dragging on too long. For instance, Degas outlived Manet by over 30 years, but those decades fall outside the scope of the narrative. The friendship between Manet and Degas was most active between 1867 and 1869, allowing you to narrow the scope even further, and investigate those years most closely.

Despite this structure, I didn’t find the writing as focused as I expected. The essay on Manet and Degas felt too drawn out, with such a host of supporting actors that the central thread was lost. The essay on Pollock and de Kooning concentrated heavily on the early parts of their lives, the years when they hadn’t even met.

I preferred the essays on the Freud-Bacon and Matisse-Picasso relationships. In each case, the narrative felt more streamlined and the story more compelling. The outsize personality of Bacon dominates the former. In the latter, it is the classic tale of artists competing for patronage that draws you in: Matisse and Picasso were both favoured by the wealthy Stein households (Gertrude and Leo on the one hand, and Sarah and Michael on the other), but their standing waxed and waned.

Given the initial premise, I wasn’t too surprised that Smee dwells less on the art and more on the social lives of the artists - many of whom were lecherous and dissolute. There is some careful analysis of individual pictures, which I enjoyed, but it is not the main driver here, and the colour plates are ungenerous. The reader is expected to know the works or to google them.

I thought Smee could have done more to highlight the resonances between the four stories, perhaps by adding a conclusion as well as an introduction. I found myself noting the same dynamics cropping up again and again, but in the main you are left to make the connections for yourself.