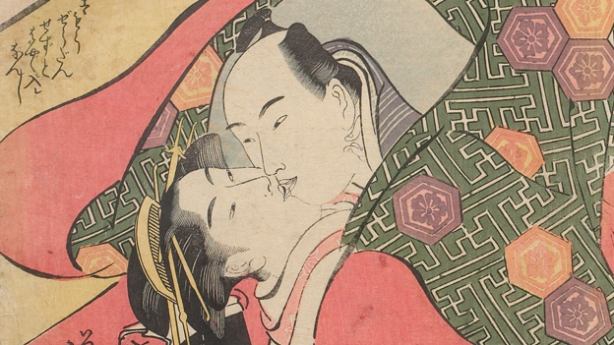 The recent Shunga exhibition, which I managed to see in its last week, was almost a victim of its own success.  The galleries were utterly packed, as though we had all come to see a display of Leonardo drawings, and the show was sold out for the rest of the day.  As I pored over print after print of sex acts – generally very graphic, the organs very big and very prominent – I found myself all too conscious of the mass of visitors, and the sense that this was very clearly not how the images were meant to be viewed.  That said, I did enjoy discovering shunga by artists that I knew from their less explicit work: Hishikawa Moronobu, Suzuki Harunobu, Torii Kiyonaga.  I should also commend the labeling: by translating the sometimes hilarious Japanese inscriptions, the curators conveyed the importance of the written word in constructing the erotic experience.