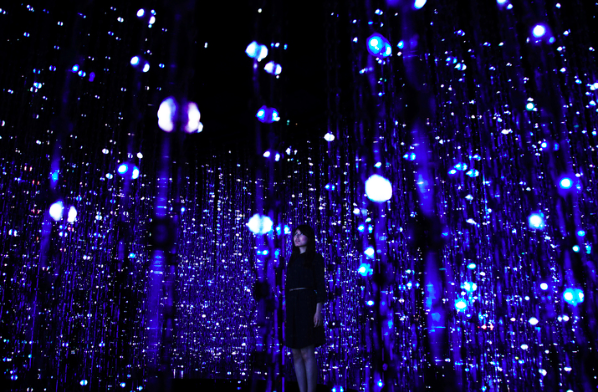 The show is the work of teamLab, a group of Japanese artists collaborating on works that explore the nexus between art and technology. It really consists of two shows, housed in different buildings. The first, "Living Digital Space", is more for adults; the second, "Future Parks", is theoretically for children but was packed with adults nurturing their inner child. Ocean creatures, space rockets and railway layouts feature prominently - plenty to keep a five-year-old boy happy, though frustrating when the interactive digital train tracks won't line up where you want them, and you can't fathom why.

In "Living Digital Space", the works are less interactive and more contemplative: flat-screen displays of constantly changing images, sometimes arranged as a series of smaller panels, sometimes unfurling across whole walls of a gallery. Themes are often drawn from the natural world, with motifs you might recognise from traditional Japanese painting, amped up: explosions of flowers, great frothing waves, crows, butterflies.

There is a strong technical underpinning, though. In Black Waves (2016), for instance, the image you see is based on calculations about the actual behaviour of particles at the surface of the water, yielding a computer-generated image which looks photographic but isn't.

The pieces that made me linger were those that used technology in more sculptural ways. I enjoyed Light Sculpture of Flames (2016), in which points of light in a giant cuboid produce mesmerising flame effects. Crystal Universe (2015), described as "an interactive installation of light sculpture", was exhilarating in the same way as a Yayoi Kusama mirrored room, like the one in the 2012 exhibition at Tate Modern.

Another immersive showpiece is Flutter of Butterflies Beyond Borders (2015), which I did not manage to see. The technology was broken and the room was closed while they fixed it. However, I was told I could come back again for free to see it another day, so perhaps I will. As art experiences go, this one is strange and tantalising, and admirably suited to its Silicon Valley location.