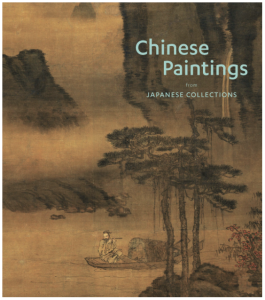 This is the catalogue for an exhibition held earlier this year at the Los Angeles County Museum of Art.  I knew that I wouldn't have the chance to see the show, but I'm interested in the dialogue between China and Japan in the visual arts, so I decided to buy myself a copy.

It can feel strange reading a catalogue without having seen the exhibition - like reading a play script without having seen the play.  You miss the spatial cues that the curator gives you, to suggest how specific works resonate or contrast with one another.  This exhibition had two narratives - that of Chinese ink painting and Japanese collecting - so there was plenty to absorb.

The title essay explores patterns of collecting by the Japanese.  In the 14th and 15th centuries, it was common for Japanese Buddhist monks and other travellers to visit China and take works back with them.  This was matched by the enthusiasm of the Japanese shoguns and other collectors for Chinese works, both in the Muromachi (1333-1568) and subsequent periods.

The essay made for interesting but dense reading, given the immense cast list involved.  I took more from the 35 catalogue entries, which struck a very good balance between the descriptive and the contextual.

A late 13th century landscape painting attributed to Sun Junze, for instance, is described in terms of subject-matter (the scholar, the attendant, the qin zither - the little details you might overlook), technique (the "axe-cut" brushstrokes) and art historical context (taking inspiration from the Southern Song painter Ma Yuan).

But it also seems that Sun was bridging the gap between 13th century Southern Song academic painters and the early Ming Zhe School in the 15th century, whose artists were reviving the same style.  In this way, each entry contributes another piece to the broader art historical jigsaw, making this a very rewarding read.