It was on a visit to the Garden Museum that I first heard of a Japanese garden at Norwich Cathedral. I saw it two years ago and again this summer and was struck by the changes wrought over time, even though it is a garden of stones rather than plants. This type of garden is called karesansui, a "dry landscape" or literally “dry-mountain-water”, because it contains an abstracted landscape created without using real water. Some stones, though, have turned a vivid green from the growth of algae in this moist and shady spot.

The Garden of Calm Virtue (tokuon no niwa) was built in 2010 by members of the Japanese Garden Society. It occupies a transitional space between the modern visitor centre and the 11th century cathedral buildings, permitting a moment of contemplation as you pass into the cathedral. However, the visitor walkway passes alongside the garden rather than through it, so you do have to appreciate its beauty from behind the glass.

The stones were selected specially and are from the glacial borders of north Scotland. They include silver-grey granite gravel, sawn grey sandstone and polished black pebbles. Three large boulders are seen as the focal point, and can be interpreted as a Buddhist triad or the Christian Trinity. The remaining stones are arranged to lead towards them. The gravel is raked in concentric rings around the stones. I love the contrast between the stones of the garden and the creamy-gold masonry of the cathedral behind.

Above and below: Japanese garden at Norwich Cathedral. Photos: STF. 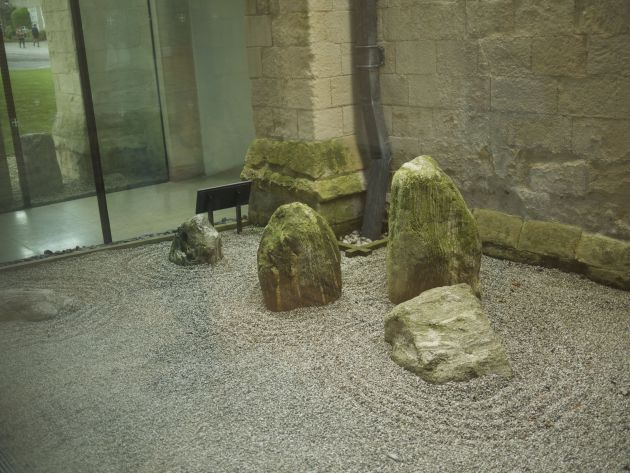