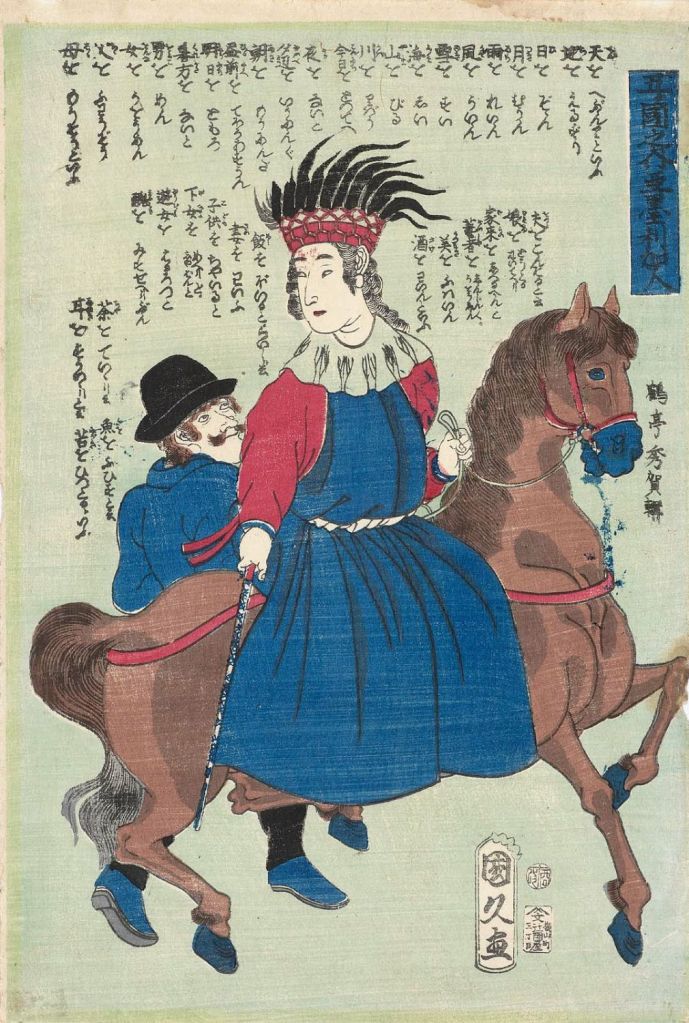 This was a talk that I attended in the crazy days before Christmas, and it’s only now that I’m catching up with myself. Dr Karen Fraser (Santa Clara University) spoke at the Asian Art Museum about western influences in Japan, in the half-century from around 1860 to 1910. What follows is my brief summary of what I learnt.

Japan was essentially closed off until the interventions of Commodore Perry in the 1850s, which forced the opening of the country to the west and prompted widespread (though as yet not very informed) interest in foreign people and foreign ideas. This Dr Fraser illustrated with woodblock prints called yokohama-e, which embraced this exotic new subject matter. Among the Five Nations, for instance, is a work by Utagawa Kunihisa that purports to show natives of France, Russia and America, but with a strong element of caricature.

The start of the Meiji period in 1868 heralded a new phase in the perception of the west. There was a concerted effort to incorporate western elements into Japanese culture. For instance, the Meiji emperor was photographed for his formal portrait in Japanese dress, but then again in western dress, symbolizing the modernisation of Japan. This transition was known as bunmei kaika (“civilisation and enlightenment”). Prints of this period represent technologies or activities that derive from the west, such as the railways or horse racing events.

By the 1880s, Japanese artists were adopting practices from western art, such as oil painting, which enables techniques such as lighting, shading and chiaroscuro not readily achieved in traditional Japanese pigments. Takahashi Yuichi painted a portrait of the Meiji emperor in 1880, and he was pretty much self-taught. A decade on, artists such as Kuroda Seiki had travelled to Paris to study. His painting Fields at Grez (1890) suggests the plein air ethos of the Impressionists, while his nude Morning Toilette (1893) caused a major reaction when it was shown in Japan in 1895.

The talk was in conjunction with the exhibition Looking East, currently on show at the Asian Art Museum. A recording of the talk is available online here.