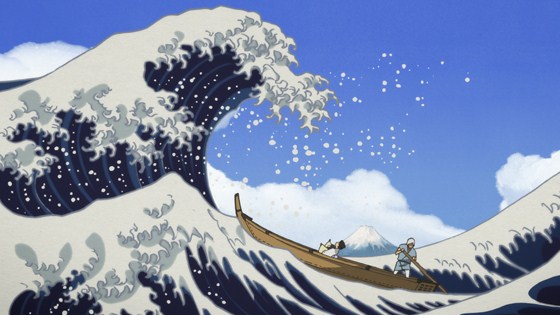 Screened during the Mill Valley Film Festival, this anime movie opens a window onto the household of Hokusai, the great 19th century Japanese artist, and in particular his daughter O-Ei. The film is based on the manga Sarusuberi and, as the introductory speaker noted, it is not by Studio Ghibli, whose output has tended to dominate western cultural channels of late.

O-Ei makes a fantastic central character for a movie. She is stubborn and feisty, exerting considerable sway over her eccentric father and his dubious hangers-on. She has inherited her father's talent and is shown to be a gifted and ambitious artist, prepared to tackle all subjects, even the seamier material. She is also very sensitive to the needs of her blind younger sister: the relationship between these two is among the more tender and affecting parts of the movie.

I marvelled at the convincing recreation of the late Edo period (the year is 1814), and at the references to iconic artworks such as the woodblock print The Great Wave. However, the goal here is not the pure realism of a biopic: we see supernatural forces intrude on the action again and again.

I also warmed to the earthy, slightly irreverent tone of the piece, which made a change from the more earnest Studio Ghibli productions. The soundtrack is a delight - for instance, the playful juxtaposition of contemporary rock music with a classic 19th century panorama of the city. Recommended, especially for those with an interest in Edo-period Japan or the life of Hokusai.

You can view the trailer below.