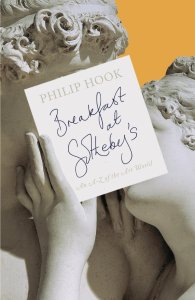 I came across this title thanks to a weekend literary supplement, an end-of-year piece where everyone cited their best reads of 2013.  I think the title misled me, though.  Philip Hook has worked in the art world for 35 years and is a director of Sotheby’s so I was expecting more of a memoir, dishing some dirt on life in an auction house.

In fact, the book is a miscellany of art-related fact and anecdote, grouped loosely by theme – artists, subject matter, provenance, the art market.  It is still packed with interesting nuggets but the structure is chaotic and switches rapidly from one topic to the next, so that just as your interest is piqued he moves you on again.

For instance, discussing wartime expropriation of art, Hook explains that in 1945 the Russian army appropriated works of art from Germany, which were then stored secretly in Russian museums for 50 years. After the fall of Communism, Hook was among the first people from the west to set eyes on these works, including Impressionist masterpieces that everyone thought had been destroyed. This story would have made a fantastic chapter in its own right, but is told here in a single paragraph.

I loved the fact that there are lots of illustrations, so reading this book is a much more visual experience than usual. However, I think exploring fewer topics (especially the autobiographical material) in more depth would have made it a superlative read.