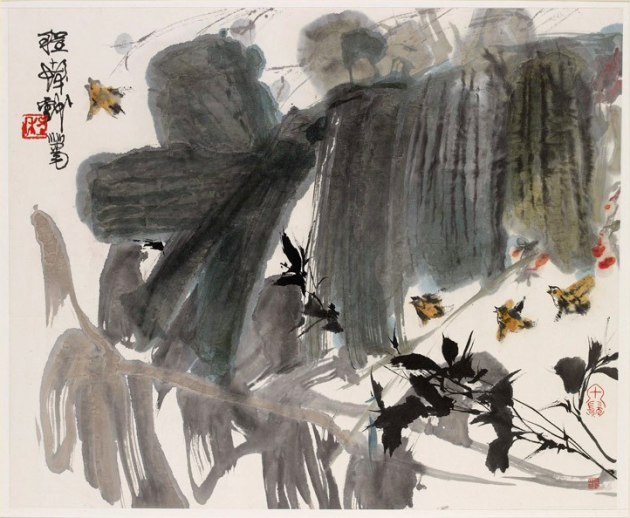 A small show at the Ashmolean explores the theme of Chinese gardens, through representations of garden scenes and garden plants. As you might expect, the stars of the show are the “Four Gentlemen” – orchid, bamboo, chrysanthemum and plum blossom, the four plants that commonly symbolize the transition of the seasons in Chinese ink-brush painting, and often convey certain moral attributes.

Bamboo on Rock is one such painting by Fu Shuda (d. 1960?) – a striking work that may refer to a poem by Zheng Xie (1693-1766), about bamboo growing out of rocks, such is its toughness. Autumn Chrysanthemum by Xu Gu (1824-1896) is a smaller, more delicate work. Again there may be a literary allusion, this time to a poem by Tao Yuanming from the Six Dynasties period (c. 220-589), describing his life after quitting government service: “I pluck chrysanthemums under the eastern hedge, then gaze long at the distant summer hills”. I also coveted a small dish in blue and white from the Kangxi period (1662-1722), with a design of plum blossom and a fourteen-character poem.  In fact, the connections with literature and scholarship are ubiquitous, such was the importance of these plants in Chinese literati culture.

If the museum releases an online version of the exhibition, I will update this page with the link.