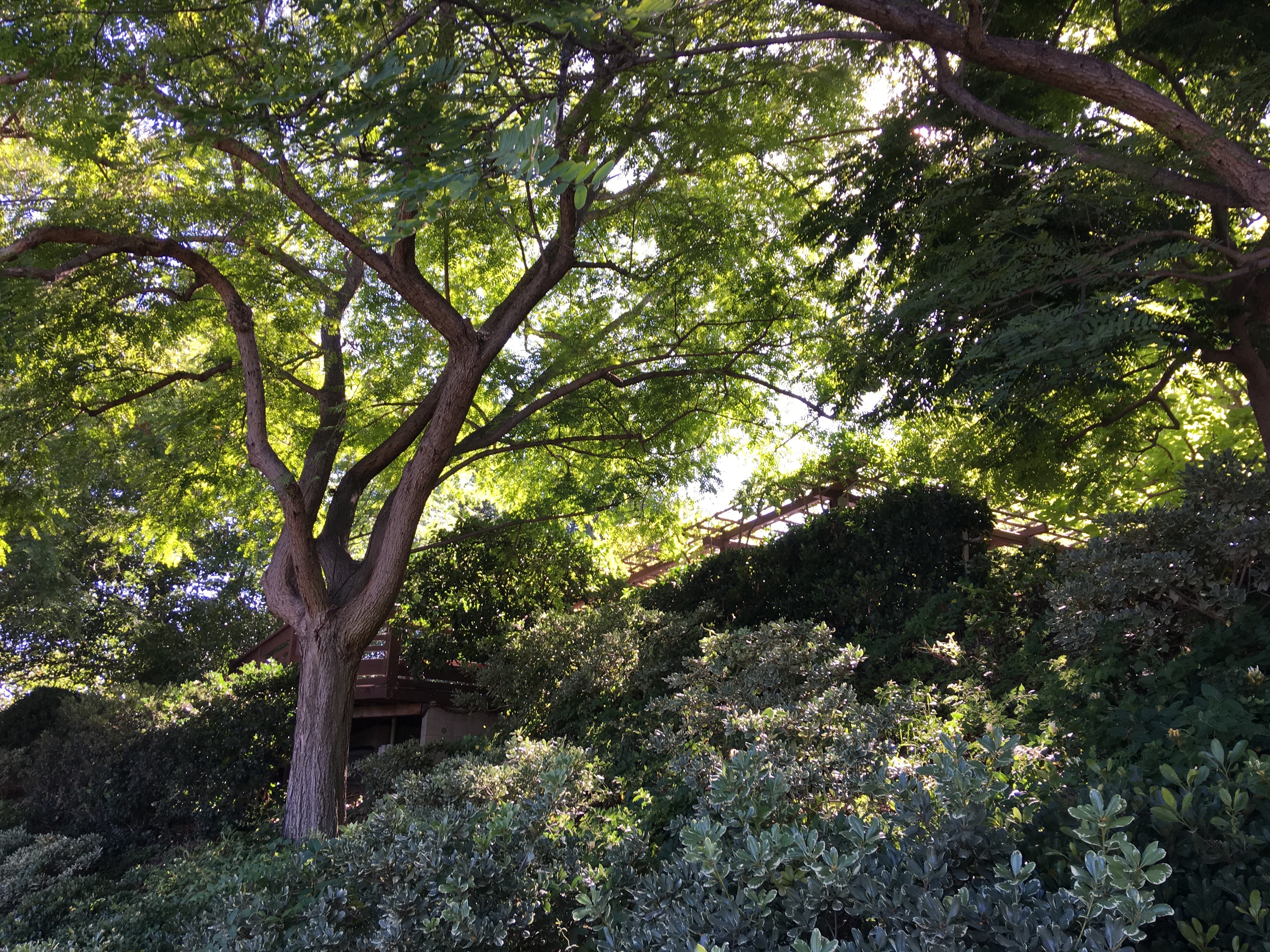 I visited the Japanese Friendship Garden during the late afternoon - a quiet, mellow time of day when the visitors had thinned right out. It occupies a 12 acre site in Balboa Park, the cultural complex of San Diego, and scene of earlier visits to the Museum of Art and the Mingei International Museum.

The Japanese name for this garden is San-Kei-En, meaning "Three Scene Garden: Water, Pastoral and Mountain". It is named after the San-Kei-En Garden in Yokohama, and it celebrates the link between San Diego and its sister city of Yokohama.

I was struck initially by the sheer size of the garden. It first opened in 1991 but was expanded in 1999 and again in 2015. It is set within a basin, so you experience the garden in different stages as you move down from the top to the bottom of the canyon. Although the heart of the garden is a central water channel with simple footbridges, you aren't even aware of this section when you begin your walk down the hillside. In this way, it feels quite different from the San Mateo Japanese Garden, which in the main is more open and visible, and laid out around a single body of water.

The garden is designed using Japanese techniques, but adapted to suit the climate, landscape and plant life of southern California. Its many varied features include: a ceremonial gate, a karesansui or dry landscape garden, a bonsai collection, a koi pond, the dragon bridge - symbol of power, strength and good luck - and the dry waterfall. With the right timing, you could also enjoy the azalea, camellia and cherry tree plantations. I would love to go back.

Above: the sloping hillsides are thickly planted, shading the pathways.

Below: dry waterfall made of rocks. 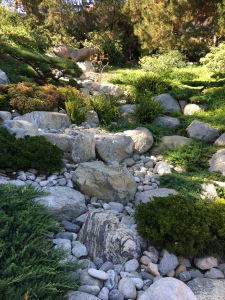 Below: waterfall , pool and pavilion. 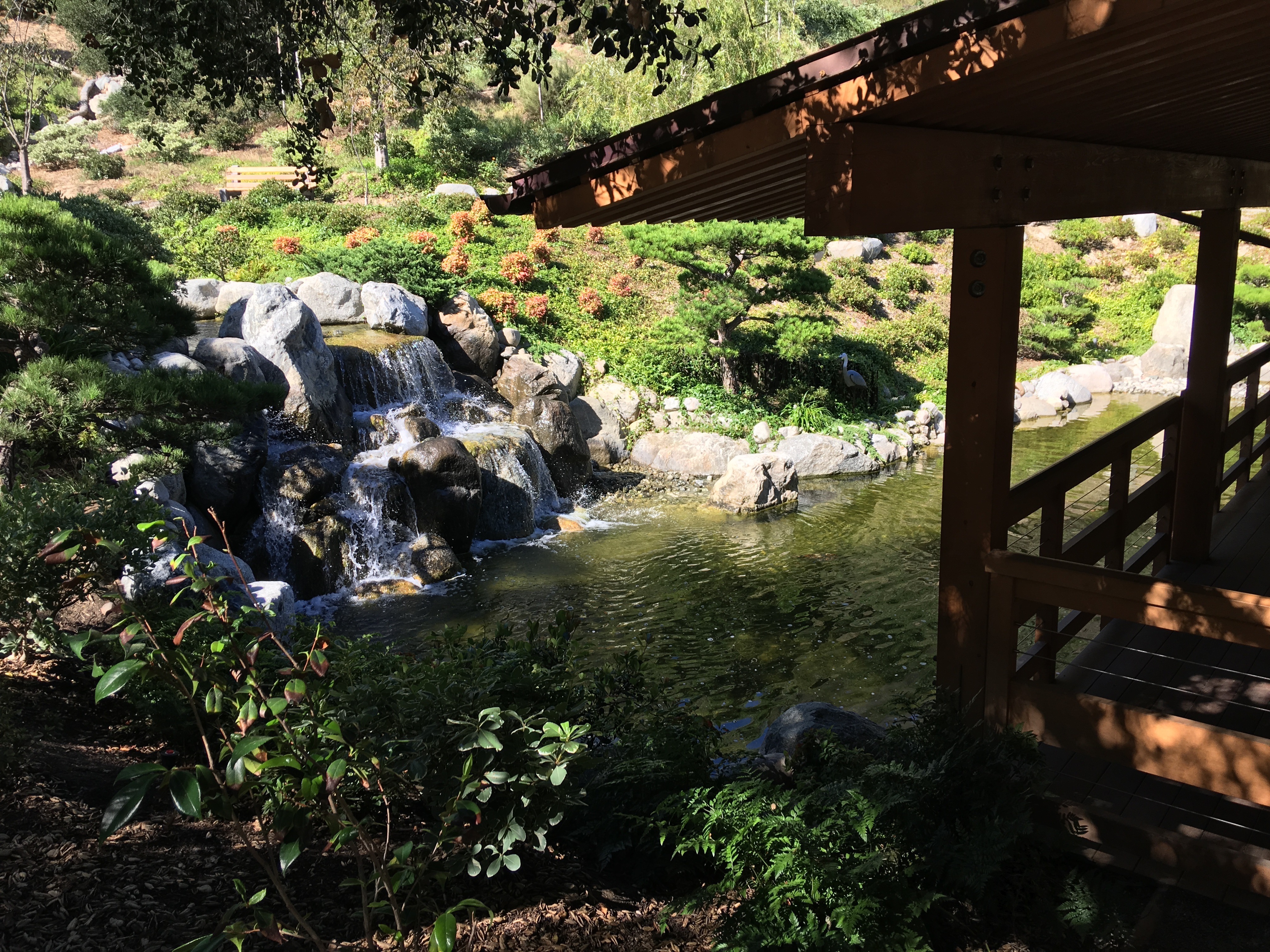 Below: a duck enjoys the tranquil pool. 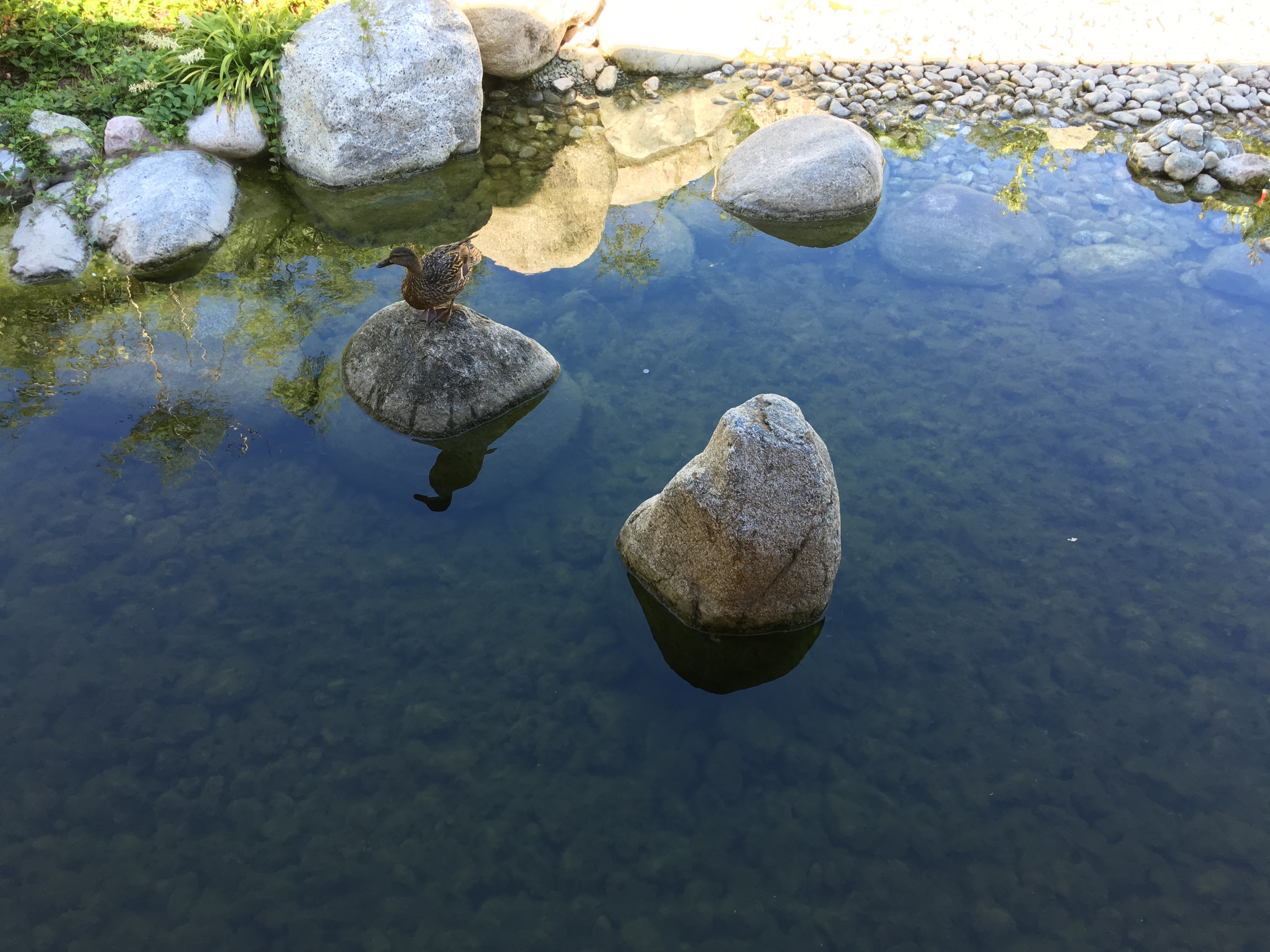 Below: water channel with tree-lined walkways on either side. 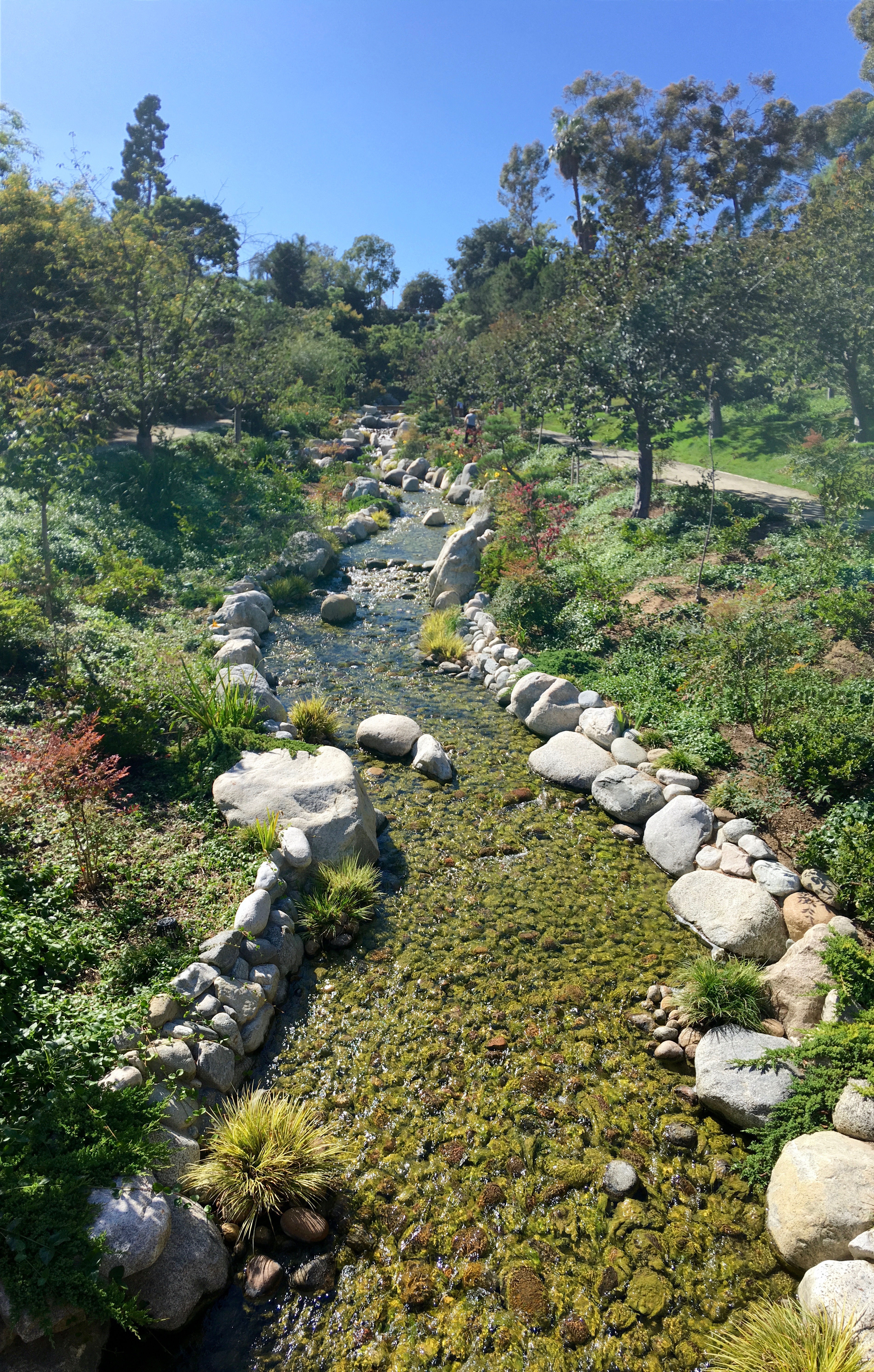 Below: a classic bamboo water feature. 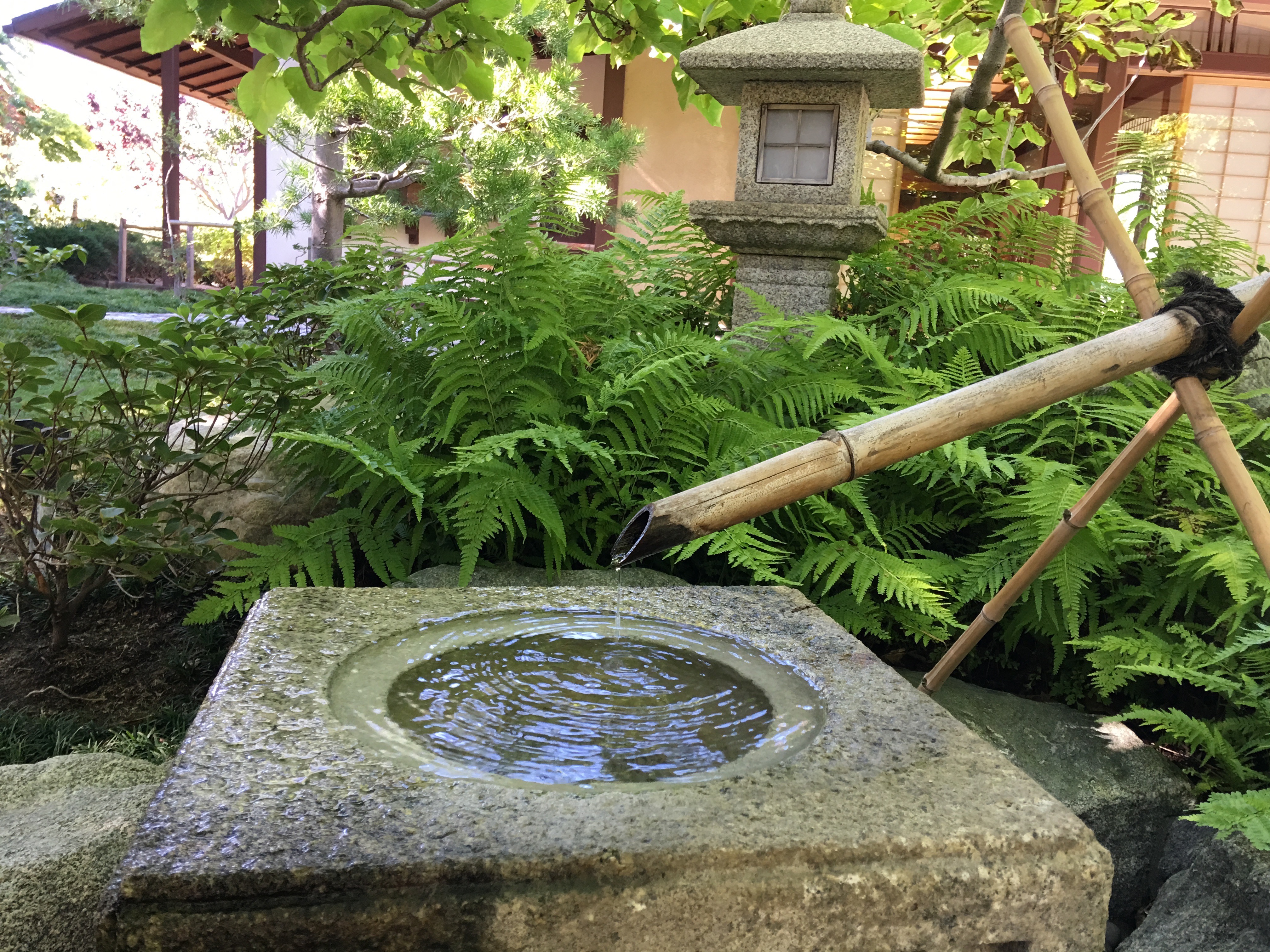