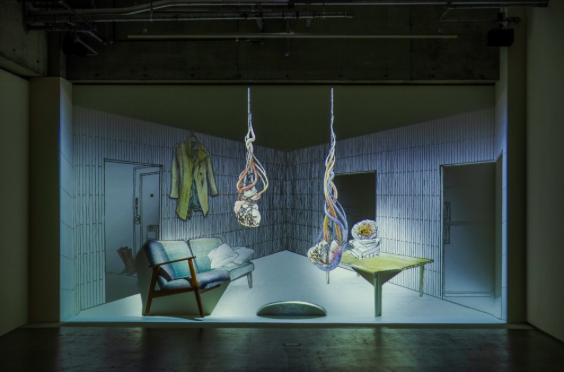 This exhibition at the San Jose Museum of Art showcases the work of Japanese artist Tabaimo, who creates bold video animations in a style influenced by manga and anime. It works well as a complement to the digital art show in my last post, which was also by Japanese artists and highly immersive.

However, the Tabaimo show distinguishes itself by offering more sense of a narrative. Each of the three main animations is loosely inspired by the same work of fiction, the 2007 novel Akunin (Villain) by Shuichi Yoshida. I was sufficiently intrigued by an exhibition themed around a single novel that I checked it out from the library this weekend - another post on this may follow.

The video installation danDAN (2009) gives the viewer a kind of intimate bird's eye view of life inside an apartment building or danchi, which is a setting used in the novel. Tabaimo presents a rapid-fire series of vignettes, some mundane and some macabre. The pace is quick and the viewing angles a little odd, so you strain to make sense of what you are seeing.

A domestic interior is also central to the video installation aitaisei-josei (2015), though here the surreal gains the upper hand. Disembodied organs (the heart, the brain) that popped up previously now take centre stage, contrasting strangely with traditional motifs from Japanese art (the full moon, the pine tree).

The effect is entertaining, if enigmatic. The work references a pair of lovers (Miho Kaneko and Yuichi Shimizu) from the novel, and even a second pair of lovers (Ohatsu and Tokubei) from a famous bunraku play of the 18th century. This would probably remain obscure to most of us, but for the excellent labelling.